OpenAPI Streaming provides real time updates on quotes, positions, orders, balances etc. to client application without having to poll the OpenAPI at high frequencies. Streaming is a feature where our servers push the content to connected clients instantly as it becomes available. The result is less network traffic and lower latency.

Much of the information available through the Saxo Bank OpenAPI changes frequently. This is information such as quotes, positions, orders, balances etc. Having to poll this information with high frequency is not a viable solution. The IO overhead alone will make such a solution undesirable. To solve this problem Saxo Banks OpenAPI offers up WebSocket streams for delivering such information, allowing the server to push information when it changes. The result is less IO usage and lower latency.

Setting up a WebSocket stream means setting up the stream and a number of subscriptions that tells the Saxo Bank OpenAPI what information you want updates on. 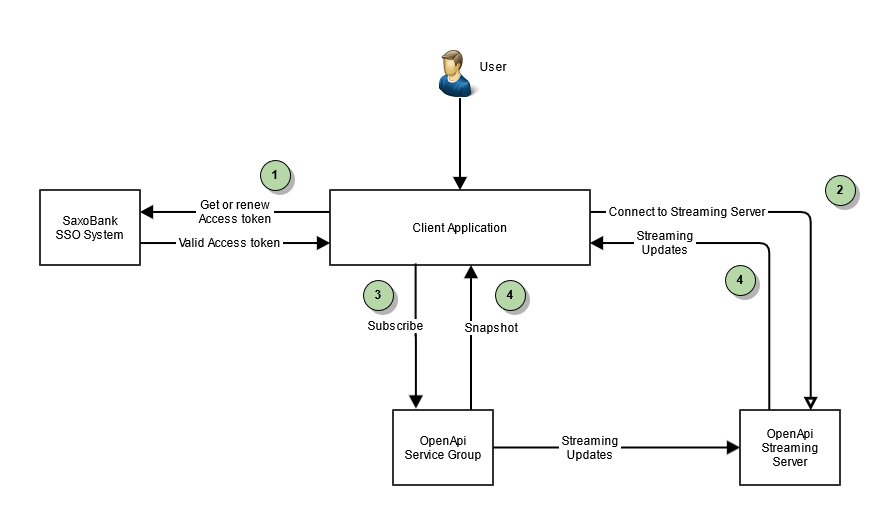 In this document you will learn:

It is not easy to start coding, based on the information below. For that reason we've provided samples in different languages.

If you've created a sample in a different language which you want to share, let us know.

Connecting to the WebSocket server

To connect to the WebSocket server the client must go through the following steps:

Here is an example connection request where the access token is sent as an HTTP header:

And here is an example connection request where the access token is sent in the query string:

If the connection can be established the server responds with HTTP status 101 Switching Protocols according to the WebSocket protocol:

If the connection cannot be established the server responds with an HTTP status code different from 101 Switching Protocols. The following 4xx range codes may be returned from the WebSocket server:

Here is an example of a subscription request. The example is a request for a price subscription. The request always has a ContextId and a ReferenceId along with some optional subscription parameters, and then a list of Arguments that are specific to a subscription.

When a WebSocket connection has been established the client can start receiving messages from subscriptions, for example price subscriptions.

The client receives the WebSocket frames one at a time and in order so the first frame received is A, then B is received, and finally C:

The data messages indicate their own size so the client must parse the data message to identify the boundaries between messages. For example, the client receives frame C and notes that the total size of the WebSocket frame payload is 1000 bytes. It then reads message 3 according to the format specified below. Assume that message 3 is 600 bytes long. Since only 600 of the 1000 bytes have been read to complete message 3, the client should read another message from the same frame and keep on doing so until the whole frame has been read. In the example message 4 would be 400 bytes long.

When the client wants to disconnect it will have to send a WebSocket close frame to the server. The server will then respond with a close frame of its own. Disconnecting will clean up your subscriptions on the server and free up connections and subscriptions, so they do not count against you when we throttle connections.

In case of errors that occur on the transport level, you will want to reconnect to the socket. To make sure this has as low an impact as possible the server keeps a small buffer of the latest messages sent to the client. When reconnecting you can specify the last message id you have received which will tell the server to start sending from that message. If you specify message id 10 as your last seen message, then the first message you will see after a reconnect is the message that comes after message 10. Do not assume that the message ids are ordered. They are merely ids and we can restart the sequence at any time if we need to.

Example of a reconnection request where the last seen message id is provided in the query string parameter messageid.

In the event that the Web Socket server detects a message loss or other error, it will send a Reset Subscription control message on the Web Socket connection. This message tells you that you have to recreate the subscriptions. The reset subscription messages may include a list of reference ids, that should be reset. If it does not include such a list or the list is empty, you will have to reset all subscriptions.
When resetting a subscription be sure to first delete the old subscriptions so these don't count against you when we throttle connections.

There are two ways to delete a subscription and create a new one (delete must come first, to prevent reaching subscription limits).

The most efficient way is to issue a new subscription request, and use the ReplaceReferenceId field to remove the existing one. The backend will handle the delete request. This minimizes the window without an active subscription.

To delete a subscription you will need to send a DELETE request to the location of the subscription resource. This location was returned in the Location header when creating the response and will be constructed by url where you subscribed, but with the context id and reference id appended as url segments (/{_contextId}/{_referenceId}) as shown in the example shown below.

Tokens issued from our OAuth2 server only have a limited lifetime. Along with the access token we also issue a refresh token. You need this refresh token to get a new access token before the current one expires. With normal http requests, you would just replace your access token once it has been renewed and include the new token in all subsequent requests. But Web Socket Streams don't work like regular HTTP requests, so the server only knows the token you had when you initiated the streaming connection. Once you have refreshed your token, you will have to let the server know that you have a new and valid token. Otherwise the server will disconnect the streaming connection once the initial token expires.

Doing this is quite simple. You need to get a new access token from our OAuth2 server and then execute a PUT request with a correct Authorization header and a context id in the querystring (/streamingws/authorize?contextid={contextid}). The server will return a 202 Accepted status code if the new access token is valid. The server will return 202 even if the context ids do not match any current connections.

Example of a re-authorization request.

In addition to the messages that you have chosen to subscribe to, the server might also need to send you messages that tell you about the state of the subscriptions you have set up. Some of these require actions from you, and other are just informational.

What state do I need to keep

When consuming our streaming services there is not much state you need to keep, but there is still some.

You also need to keep track of the latest message id you have received. In case you need to reconnect to the WebSocket you will need to pass this to the WebSocket server in order to pick up messages where you left off.

Do not assume that the message ids are ordered. They are arbitrary ids and we can restart the sequence at any time if we need to.