Removal of a number of fields in the cs/v1/tradingconditions/instrument resource:

On, or shortly after May 1st. 2022 we will be changing the value returned in the NetPositionId field, which can be found on the /port/v1/positions, /port/v1/netpositions  and /port/v1/closedpositions resources.

The intended purpose of the NetPositionId field is to represent a summation/grouping of positions, which should be related based on a scope, such as Client, AccountGroup or Account. No other meaning should be inferred from the NetPositionId!

Since the NetPositionId is a temporary construct it is synthesized from a combination of several factors. Currently you may see a NetPositionId of "APPL:XNAS__Stock". After the change being introduced on or after May 1st 2022, the NetPositionId may instead be "9834780_xyz", or "OTgzNDc4MF94eXoK".

The intended purpose of NetPositionId serving as a temporary group of related positions will continue to hold.

Please review you usage of NetPositionId. If you only use it for the purpose of identifying a group of related positions, you do not need to do anything.

If on the other hand you somehow parse the value returned in NetPositionId and use this to infer something about the instrument on which the grouping is made, then you must change your code!

This usage was never intended and going forward this will no longer be possible. Instead you may  look at the values of AssetType found directly on the  entity and Symbol found in the nested object "DisplayAndFormat".

We will be removing external access to all endpoints under the /cs/v2/cashmanagement/withdrawals/* route.

If you are using any of these endpoints, you should be switching to the equivalent endpoints in the AssetTransfers service group:

On or shortly after April 1st. 2022 we will be introducing HTTP/2 and Akamai acceleration for Saxo Bank OpenAPI.

This is to optimize performance. We expect this to be non-breaking for almost all of our client applications, but we still encourage you to read this article and perform the suggested tests.

We will be correcting two field names within the at/v3/tradeleaders resource:

To facilitate a better separation of instruments with different properties, Saxo Bank has decided to redefine the AssetType enumeration. In the following we will refer to this refined definition as "Extended AssetTypes".

If we were to enforce this, it would be a breaking change, so currently we will only introduce the new definition for new applications, created after Nov 1st 2021. At that time we will also switch the developer portal to work with this new definition.

Please read this description on Extended AssetTypes for further information.

We will be removing the ISINCode field from the following endpoints under the ClientServices service group:

We will be removing the CashAvailableForWithdrawal field from:

The value returned was not always accurate, and improving this would be computationally very expensive, especially for an endpoint which is used heavily. Applications which require this number - for the purpose of letting a client determine how much money to actually withdraw - can explicitly call the atr/v1/cashmanagement/withdrawallimits endpoint.

With Saxo Banks rapid growth, we are soon approaching the point where several identifiers including PositionIds, OrderIds, and TradeIds reach the number of '2.147.483.647'.

We expect this to happen between October 2020 and December 2020.

We are informing you about this for two reasons.

If you are storing such Id's in an integer your code may break!

In many programming languages 2.147.483.647 is the maximum positive number, which can be stored in an integer. If your code is written to interpret or store such Ids as integers, there is a risk that your code will break when our ids pass that barrier.

Almost everywhere in our API have we defined such ids as strings, and if you have also used a string representation in your code, you should not experience any problems.

If on the other hand - for whatever reason - you have converted these strings to integers in your code, you must now start to consider the impact of the Id's passing the magic 2.147.483.647 number!

We must actually update the type of a few in-frequently used fields in our API from 'int' to 'string' - BREAKING! (On or after September 1 2020)

When reviewing this issue, we unfortunately found two API endpoints, which did not represent these ids as strings.

Since the fields are used very infrequently we have decided to make minor BREAKING changes as outlined below.

Trade Allocation Keys are no longer allowed to include a broker account - Breaking! (On or after May 1st)

While not recommended, it is currently possible to specify an allocation key in which one of the participating accounts is the brokers block trading account.

It is not allowed for a broker account to participate in a block trade allocation. This restriction has been enforced in our UI's for the past two years. With the release on or after May 1st. the restriction will also be enforced in OpenAPI.

In case the traded amount doesn't match the total number of units in the key, there can be one or several remainders when allocation, typically through partial fills. Therefore an allocation key must always include at least one account designated to receive the remainder.

Until now it has been possible - through OpenAPI - to specify an allocation key, where:

As a result any remainder would be placed on the brokers account.

After the upcoming release on or after May 1st, this will no longer be possible.

Trying to create a key which violates these rules will be rejected.

Trying to place an order, with a previously defined key which violates these rules, will also be rejected.

Correction of Error on hist/v3/perf and at/v3/tradeLeaders endpoint - Potentially Breaking. (on or after Dec 1st)

In the AutoTrading service group:

When investigating the sections:

you will find that both endpoints return data for a date one day out of the requested range.

For example if the caller specifies a FromDate=2019-01-01, the response will also include an entry for 2018-12-31, with a value of 0. Once our change is released, we will no longer return data outside the specified range.

As an example. Currently we will return this: 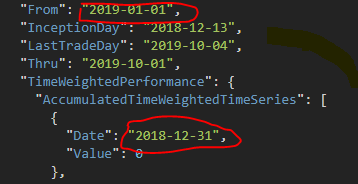 After the change has been released we will instead return:

Removal of SingleAndClosedPositions array in NetPositions endpoint - Breaking (On or after Dec 1st).

Please beware that during November we will no longer support the SingleAndClosedPositions struction in the NetPositions resource. This as been marked obsolete/do not use since June.

Note: We are only releasing this with short notice as we have no known apps using this data structure.

By October 2019 we will remove the enum value "TradeSessions"  used when calling /ref/v1/instruments details.

This enum will be replaced with the value "TradingSessions".

There is no change to the response contract.

By October 2019 we will remove the field named "UtilzationPct" from the LineStatus structure. This structure is returned by several properties within the response from the port/v1/balances endpoint.

The field will be replaced with a field called "UtilizationPct" with exactly the same meaning. Please use this instead.

By October 2019 we will finally remove support for trade/v1/orders. Please use the trade/v2/orders endpoint instead.

By September 2019 we will remove the AskSwap and BidSwap fields from the InstrumentPriceDetails structure. This structure is currently returned from the trade/v1/infoprices and trade/v1/prices endpoints.

The fields will be replaced with the new fields SwapAsk and SwapBid with exactly the same value and meaning, please use these instead.

Removed as the contents of this field was always just an empty string "".

Removal of support for TLS 1.0 and 1.1 - Potentially Breaking

Please beware that by November 1st we will no longer support connections using TLS 1.0 or 1.1. We are making this move in order to ensure a higher level of transport security and due to the fact that TLS 1.0 and 1.1 are planned to be deprecated during 2020.

You must make sure that your connection software supports TLS 1.2.

In January we will introduce a change whereby an order will retain the same order id, even if the order is filled over several exchange sessions. This change will make it easier to keep track of an order and the position or positions created as the result of the order being filled.

The details of this change and how it may impact you is described in the enclosed article: RELEASED: OrderId remains the same for partially filled orders held overnight.

By April 2019 we will remove the Commissions:CommissionsDetailed field from the /trade/v2/orders/precheck endpoint.

Instead please use the Cost fieldgroup instead, which also includes a commissions component.

In an effort to simplify order placement for FX instruments, we will be transitioning from one set of stop orders to another set of stop orders. The details of this change and how it may impact you is described in the enclosed article: RELEASED: New Order Types for FX Instruments.

In order to make the transition as smooth as possible the change will be rolled out over the period of January 2019- May 2019.

In February we will no longer provide a value for the MaxExposure field returned from the /cs/v1/tradingconditions/instrument endpoint. The field is already nullable.

By early January 2019 we will remove the MarginImpactDetailed field group from the /trade/v2/orders/precheck endpoint.

Until now, FX instruments have only had one tick size which was defined by the field 'TickSize' under instrument details.

As of today we will operate with three separate tick sizes when placing orders:

Until August 15th we will not enforce these new tick sizes when placing orders and instead continue to accept the standard tick size for all orders. After August 15th any order not using the correct tick size for its order type will be rejected.

This will not affect any non-FX instruments.