It is possible to place trades on a master account and have them allocated out to a number of sub accounts. The typical use case is a money manager with discretionary mandate who would like to buy a position in a particular stock for several of his/her clients. Instead of making individual trades on each of the client accounts, the money manager makes a single block trade and lets the Saxo trading system allocate the block trade to the individual client accounts.

The steps for doing so is roughly:

The Saxo execution engine then takes care of filling the order in the market, and allocating the positions according to the rules specified in the allocation key.

There must be one entry in the ParticipatingAccountsInfo array for each of the accounts onto which the block trade should be allocated. Each entry is defined as follows: 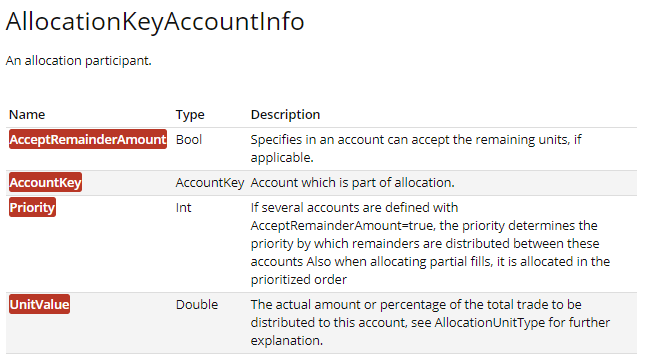 If the order amount does not match a multiple of the sum of UnitValues then any remainder will be distributed onto accounts for which the "AcceptRemainderAmount" has been set to true.

Accounts with "AcceptRemainderAmount" must also have a unique priority. In situations where orders are partially filled, then the Priority field is used to determine in what order any remaining amounts are added to each account.

While our allocation system is quite flexible and able to handle remainders etc. it is highly recommended that you ensure that the sum of amounts in the allocation key matches the order amount. This is easy to do by specifying onetime allocation keys.

There must be at least one entry in the ParticipatingAccountsInfo array, with the AcceptRemainderAmount field is set to true!

We will later introduce a way to simulate the update of an existing allocation key, in effect

a) Creating a new key with the same AllocationKeyName

b) Invalidating the existing allocation key

An allocation key can take on one of three status values:

When creating a new key:

A "OneTime" allocation key is intended to be used only once. A typical usage scenario is the one outlined in the introduction, where a money manager would like to define a particular allocation to support a particular trade.

An "Active" allocation key is intended to be used more than once. These are the type of keys, which you will typically administer in a trading platform. For example a money manager may have defined a key, which always distributes 10% of the total trade amount equally between 10 of his clients etc.

A "normal" or "Active" allocation key:

It is very simple to use an allocation key. Simply set the the AllocationKey property on an order to the Id of the key you want to use. You can use allocation keys with any type of order, from simple stand alone orders to entry orders with related stop/limit orders.

Allocation is done as a two step process:

The following sample illustrates how to:

The sample will work on the following client and account structure:

Notice, how in addition to the BlockTrade8393 account, there is also an ERROR_8393 account. This account is to hold any amounts, which cannot be distributed, when there is a mismatch between the size of the order being placed and the sum of units in the ParticipatingAccountsInfo array.

Define an allocation key which:

Define another application keys which:

Define another allocation key which:

So lets use the first allocation key to buy 60.000 EURUSD and have them allocated out.

Notice how you get a number of trade messages. The first first messages pertain to the original order which is placed and the immediately filled. The second two documents that first the order and then the positions are allocated according to the key specification.

If on the other hand I had used the second allocationKey the remaining 5000 would be distributed between the two accounts, which had "AcceptRemainderAmount" set to true.